​CRAIG BARRON is an Academy Award®-winning visual effects supervisor, lecturer, and film historian. He has contributed to the visual effects on more than 100 films. Mr. Barron is a founding member of the Visual Effects Society and is the co-author of The Invisible Art: The Legends of Movie Matte Painting.

​ROCCO LARDIERE purchased the book, The Exploration of Mars, illustrated by Chesley Bonestell, when he was 11 years old. The book’s beautiful paintings inspired him to pursue a career as a rocket engineer. Since then, he’s been a part of the most significant space launches during the last 35 years, including NASA’s Mars Rover programs, the Deep Impact comet mission, and the GPS satellite system. 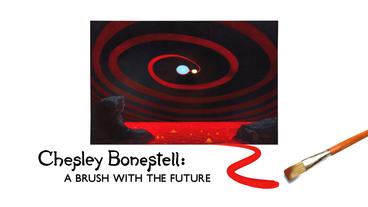 ​​​​​DR. JEFFREY NORRIS is a Computer Scientist currently with Apple. Previously at NASA's Jet Propulsion Laboratory, he served many years as an innovative leader in human-systems interaction and space mission operations with deep expertise in computer science and visualization.

​​​EDWARD JASTER is the Senior Vice President of Heritage Auctions, Inc., the largest collectibles auctioneer and the third largest auction house in the world. An expert in acquiring, trading, and selling world-class collections of American photography, illustration art, and vintage comic books, Mr. Jaster brought his vast experience and expertise in collectibles to Heritage Auctions in 2002.

​​LYNETTE COOK is a space artist, fine art painter, and co-author of Infinite Worlds: An Illustrated Voyage to Planets Beyond Our Sun, Lynette also has considerable artistic credits in television productions for CNN, PBS, The Learning Channel, BBC Television and many others. Well-known for her exoplanet artwork, Lynette’s paintings continue to take the public on a visual journey to the far reaches of outer space.

DAVID A. AGUILAR is a writer, astronomer, lecturer and space artist. He appears regularly on The Science Channel and is the author and illustrator of seven National Geographic books on astronomy including Cosmic Catastrophes. He was a member of the Hubble Space Telescope Repair Team. In 2015, he directed the NASA’s New Horizons Mission special media team during the fly-by of Pluto.

IRENE EDWARDS, veteran writer and magazine editor, discusses Chesley Bonestell's important contributions to Sunset Magazine, which has been in publication for over 120 years. The 1904 issue of Sunset marked the first time Chesley's art was introduced to the public and heralded a remarkable career that was about to unfold.

​​ANNE PAPINEAU is a long-time journalist with The Carmel Pine Cone, a newspaper published in Carmel, California. Anne had the special opportunity to interview Chesley Bonestell at his home in 1984 for an article she was writing about a rare exhibition of Mr. Bonestell's work on display at the Monterey Museum of Art.

DR. CATHERINE NEWELL teaches religious studies at the University of Miami. Her forthcoming book set for release in May 2019, Destined for the Stars: Faith, the Future and America's Final Frontier, focuses on the artists, historians, and scientists who popularized space exploration. Dr. Newell frames the conquest of “the final frontier” as a modern legacy of the exploration of the American Old West in the context of Chesley Bonestell’s paintings.

​RICHARD EDLUND has been honored with four Academy Awards® for visual effects in Star Wars V: The Empire Strikes Back, Raiders of the Lost Ark, and Return of the Jedi. He’s also produced visual effects for 30-plus movies, including Die Hard, Ghost, Poltergeist 2, Cliffhanger, Batman Returns, Alien3, Species, Multiplicity, and Air Force One.

Irving Pichel was an American actor and film director. Among other achievements, Pichel directed the critically-acclaimed, science-fiction film Destination Moon. In a rare excerpt from the on-set footage  of  the making of this 1950 film, Mr. Pichel introduces American television audiences to Chesley Bonestell.

​​DR. LUCIANNE WALKOWICZ is an astronomer and an artist. She holds a B.S. in Physics and Astronomy from Johns Hopkins University and an M.S. and Ph. D. from the University of Washington. She was the Kepler Fellow at UC Berkeley and the Henry Norris Russell Fellow at Princeton University before she joined the astronomy department at Adler Planetarium in 2014. She is also the former NASA Astrobiology Chair at the Library of Congress.

LOUIS SALERNO is the owner of Questroyal Fine Art, a renowned New York gallery focusing exclusively on paintings from the prestigious Hudson River School of American art. These paintings embraced the vast potential of a country that was in the process of identifying itself. In a similar fashion, Chesley Bonestell’s art inspired people to begin the exploration a new frontier: outer space.

WYN WACHHORST is an essayist and award-winning author of the best-selling book The Dream of Spaceflight and numerous other publications. Mr. Wachhorst was asked by NASA’s Decade Planning Team to write their mission statement. He also writes speeches and articles for Apollo astronaut Buzz Aldrin.

​​​JAMES DALESSANDRO produced the documentary film The Damndest, Finest Ruins, chronicling the devastation of the 1906 San Francisco Earthquake. He’s also the author of 1906, a novel set in San Francisco at the time of the Great Earthquake. Mr. Dalessandro is currently writing and producing for television and wrote the pilot for The Chosen, a new series created by Stan Lee.

The creation of Chesley Bonestell: A Brush With The Future was guided by two Bonestell experts – Ron Miller and Melvin Schuetz - and the film includes the perspectives of over twenty individuals who either knew Mr. Bonestell or were influenced by his work.

​RAY BRADBURY was one of America’s most famous fantasy and horror writers of the 20th century. He wrote over 30 books, his most famous ones being Fahrenheit 451, The Martian Chronicles, The Illustrated Man and Something Wicked This Way Comes. Through exclusive archival interview footage, Mr. Bradbury discusses Chesley Bonestell and his impact on the world of space art.

DON DAVIS is an acclaimed space artist. As a young man, he sought a meeting with Chesley Bonestell. Impressed by his work, Bonestell mentored Davis’ early artistic career. Mr. Davis was part of the team of Emmy-winning space artists who provided the visual effects for the PBS series Cosmos, hosted by Carl Sagan. The asteroid “13330 Dondavis” is named after him.

​BEN HEYWOOD served as curator for a special exhibition of Chesley Bonestell paintings and artwork called Imagined Futures. This installation was a special showing of "Bonestelliana" sourced from the Paul G. Allen Family Foundation Collection and was displayed at the Pivot Art + Culture Museum in Seattle, Washington.